Quite aside from the quality of its academic libraries and their sheer quantity, Cambridge is in many ways the ideal place in which to do a library traineeship; it is also a great place to live, characterised by a number of large green spaces, the beautiful historic buildings which comprise its centre, and the River Cam from which it takes its name 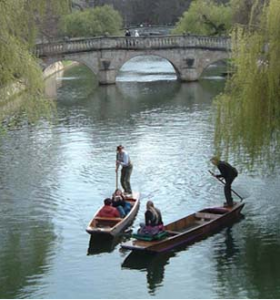 The compact, largely pedestrianised city centre and its fairly flat terrain mean that most parts of Cambridge are easily reachable on foot, while many of its residents choose to travel by bicycle. Although small, the town centre is packed with a good variety of restaurants and pubs as well as a few clubs. Of particular note is The Eagle Pub in Bene’t Street, whose walls and ceiling bear the graffiti of World War II airmen, and in which Watson and Crick’s discovery of the structure of DNA was famously first announced. You can also expect to find all of the regular town-centre staples: several cinemas, swimming pools, a bowling alley, shopping centres, theatres and two larger venues (The Junction and The Corn Exchange). What’s more, the centre of London is only 50 minutes away on the twice-hourly trains to King’s Cross. 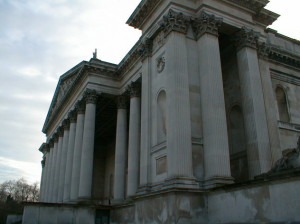 Culturally, Cambridge is home to the Kettle’s Yard art gallery, the Fitzwilliam museum, and a number of other smaller museums. The town also plays host to renowned folk, beer and film festivals and to the Strawberry Fair and Midsummer Fair, all of which take place annually.

For more information about places to eat and things to do in Cambridge try Time Out.

The accommodation scene in Cambridge generally moves quite quickly, especially around the start of the academic year. Opting for a room in a shared house or accommodation is probably the best way to go if you’re renting by yourself, since the housing market in Cambridge is second only to London in how expensive it is. It does, however, have the advantage over London in that it is a small city, and you can get around by bike or on foot pretty easily. It’s worth looking at the rental places advertised on SpareRoom, Zoopla, Gumtree, Rightmove, and On the Market. Alternatively, getting in touch with the letting/estate agents with offices in Cambridge can be helpful. Leaders normally advertise some house shares, and Belvoir, Tucker Gardner, and the Cambridge Property Lettings may also be worth consulting. Cambridgeshire Live also advertises property news on their website.

If possible, it may be a good idea to spend a couple of days in Cambridge at some point before you start, and line up a few viewings in advance.

As a member of University staff, you are eligible to join the Accommodation Service for free. They hold listings for a number of single rooms, both University-owned and private rentals, as well as for a few houses. Trainees have in the past been known to share a house, as this can be the better value option. The Accommodation Service’s advice is to start your search no more than four to five months in advance, and they recommend allowing a minimum of four weeks to find something. Some colleges may offer you temporary accommodation for while you house-hunt – it’s definitely worth asking. Not only could this allow a greater flexibility for moving-in dates, but it is also cheaper and much more convenient than having to find temporary accommodation elsewhere.

As with many other university towns, Cambridge comes complete with its own set of vocabulary and customs. Here is a quick explanation of the University’s unusual structure, its traditions, and some of the jargon it helps to be aware of: 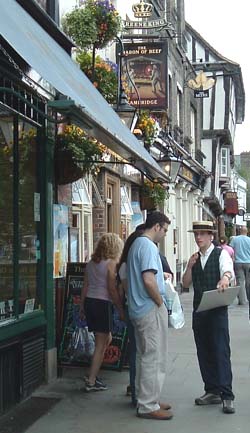 One of the most obvious peculiarities of Cambridge is the College system, which sets it apart from most other British universities. The colleges are self-governing bodies, independent of the University, and provide accommodation, food, entertainment, pastoral care and a certain amount of teaching for their students. In addition to belonging to a college, all students belong to a Faculty. Each faculty belongs to one of six Schools, and within the faculty students may be taught by one or more Departments. For example, MMLL is the Modern and Medieval Languages and Linguistics faculty, a part of the School of Arts and Humanities, and consists of the departments of French, Italian, Linguistics, etc. Popular Cambridge slang means that students of Natural Sciences are known as Natscis (pronounced ‘nat-skis’), Computer Scientists are Compscis and Mathematicians Mathmos. Certain colleges, too, bear nicknames: Emmanuel College is more commonly called Emma; St Catharine’s is Catz; Gonville and Caius simply Caius (pronounced ‘keys’); Fitzwilliam is Fitz and Trinity Hall is Tit Hall.

Both colleges and faculties are responsible for teaching: lectures are faculty-based, whereas it is the responsibility of a student’s Director of Studies (commonly referred to as a ‘DoS’: the college officer responsible for a student’s academic progress) to arrange their supervisions – meetings between a supervisor and a small number of students (usually between 1 and 4), elsewhere known as tutorials. A supervisor is usually a college fellow, which means they hold an academic post in a particular college, but can also be a member of faculty teaching staff. Cambridge degree courses and examinations are known as Triposes and are split into Part I and Part II, of which one part will last two years. In order to receive the BA Hons degree, students must pass both parts.

There are three university teaching terms: Michaelmas, Lent and Easter. Weeks in Cambridge run from Thursdays to Wednesdays, except, curiously, for Art Historians, whose weeks begin on Mondays. Full term, which starts on a Tuesday and ends on a Friday, is the period of 60 days (53 in Easter) just enclosing the eight nominated weeks of term, and it is within these 60 days that most university and college teaching takes place. Students at Cambridge come up at the start of term and go down at the end, regardless of geographical direction. Alternatively, a student may be sent down, which is the Cambridge equivalent of expulsion.

Perhaps the least logical of all Cambridge terminology is May Week: a stretch of about ten days in the middle of June, which takes place after the end of examinations and before results are published. The end of the academic year is celebrated by inter-collegiate rowing competitions (called Bumps), Suicide Sunday (a day of garden parties) and all-night-long May Balls, of which those held at St John’s College and Trinity College are the most famous.

Finally, the University Library, where much of the Graduate Trainees’ teaching takes place, is known quite simply as the UL.

Welcome to the Cambridge Trainee Librarians' Online Group, which provides information on
careers in librarianship and the CILIP graduate trainee scheme, as well as an insight into life as a Library Graduate Trainee in
Cambridge.